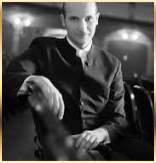 “… one of the greatest conductors I have ever met!” – Fabio Luisi on Gaetano d’Espinosa.

Born in Palermo in 1978, Gaetano d’Espinosa studied piano, violin and composition in his hometown with Mihal Spinei and Turi Belfiore, and later with Salvatore Accardo in Milan.

Gaetano d’Espinosa served as First Concertmaster at the Staatskapelle Dresden from 2001 until 2008 when he resigned to focus on his conducting career, taking on the role of musical assistant of Fabio Luisi. He also premiered his First Concerto for violin under the baton of Christian Arming.

In 2010 d’Espinosa conducted “La Traviata” at the Semperoper Dresden to resounding acclaim and, as assistant to Fabio Luisi, he travelled to the Pacific Music Festival in Japan conducting performances of “La Boheme”. This has been a sudden start of an unbelievable career that took him, in less than two years, to be invited by major orchestras and theatres:

In October 2011 Gaetano made his debut at the Oper Graz conducting a “Otello” with enourmous success and just returned to Graz to conduct a new production of “Maria Stuarda” with has been received with huge success from both by critics and audience:

“Conductor Gateano d’Espinosa lets already the Ouverture sparkle brilliantly, together with the Graz Philharmonic Orchestra, playing in top form; he again and again finds poetical solutions, the same time giving the performance a lot of momentum. Conducting, leaving nothing else to be desired.”

Last January, at a short notice last call, he has been called by the Opera de Lyon to conduct Puccini’s “Trittico” replacing a sick maestro: this has been a terrific moment in Gaetano’s career and his job has been received with greatest acclaim by international press, astonished for his command of both orchestra and stage:

“…the conducting is accurate as a clock, colourful, full of irony and range of emotions…”

“…and Puccini is a marvel, with the orchestra in a top form with d’Espinosa…”