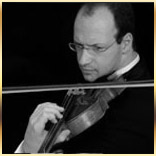 Iakov Zats career followed the typical path for a musician coming from the Russian school. He frequented the prestigious institute for child-prodigies into the renowned Moscow Conservatoire, where he graduated, and so beginning immediately a demanding career that brought him to perform in his home land and abroad. In 1992 he was appointed artistic director of the well known chamber music ensemble “New Chamber Orchestra of Moscow”.

In 1993 he joins the “Moscow Soloists” as viola solo. In 1994 he decides to leave Russia and settle in Western Europe, where he has the chance to grow musica lly playing under the baton of conductors like C. Abbado, B. Haitink, R. Muti, G. Pretre, keeping alive the main issues of the Russian school. His performances are so distinguished for the warmth and expressivity of sound, a spontaneity linked at a strict logic of phrasing.

From 1996 to 1998 he had been holding the position of viola solo in the “G. Verdi Orchestra” in Milan. In 2001 he’s invited by C. Abbado to play in the “Mahler Chamber Orchestra”. He’s thus played in the most important concert-halls worldwide: Moscow, London, Paris, Milan. He’s also performed recitals in festivals and concert seasons in Milan, Fabriano, Chioggia, Modica, Verona, Camerino and Stresa.

From 2006 he’s viola solo in the Orchestra of “Fondazione Arena di Verona”, and holds the same position in the “Orchestra Filarmonica of Fondazione Toscanini”. He’s recently recorded and revised the edition of the Sonata opus 28 by E. Ysaye for the “White Prince Edition”.

Since 2008 he has been teaching in Conservatory of Reggio Calabria (Italy).